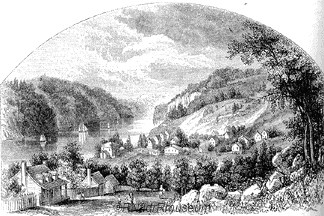 On October 13th, the Americans launched their first great offensive of the war. The American commander, General van Rensselaer, commanded a force of nearly 6500 troops. On October 13th, 1812 he was able to position part of his army atop Queenston Heights despite a spirited defence by its British defenders. General Brock departed hastily from Fort George and led a force which counter-attacked the Americans. The first attempt failed and General Brock was killed by an American sniper. British reinforcements, along with Indian allies from Fort George were later able to outflank the Americans who eventually surrendered marking Queenstown Heights as a glorious victory for the British despite the loss of their beloved commander. The death of Brock was a watershed moment for British leadership throughout the rest of the war.

(There were no known members of the Royal Newfoundland Regiment involved in this battle.)[/vc_column_text][/vc_column][/vc_row]