Last year a small dedicated group of people gathered to pay respects to one of Newfoundland’s great military heroes, Sgt. Thomas Ricketts. As the sun set, the group gathered around Ricketts headstone to perform a simple ceremony at  5:30 pm sharp in the Anglican Cemetery on Forest Road to mark the 50th Anniversary of his death.

Ricketts gained immortal fame in action near a small Belgium Village. His bravery in the face of an enemy onslaught saved The Royal Newfoundland Regiment from heavy casualties. Ricketts, along with his section commander, Cpl. Mathew Brazil volunteered to out flank a Germany battery of four field guns and four machine guns.

Within 300 yards of the enemy gun position Ricketts and Brazil fired on the Germans but quickly exhausted the remainder of the Lewis gun ammunition. The Germans immediately seized the opportunity to bring up their horses and wagons to remove the guns. Ricketts seeing that the Germans were moving up their gun teams made a hasty decision to double back for two magazine carriers some 100 yards behind them. Ricketts once said: “The way it was with me was that I was determined that I would this time get them or they would get me.”  Leaving Brazil in the forward position laying down covering fire, Ricketts took flight in search of the carriers. He managed to dodge fire from four German machine guns and an artillery piece firing point blank, concentrating their fire solely on him. It was nothing short of miraculous that he was not hit.

The Germans seeing Ricketts returning with more ammunition turned their attention on him once again in desperation to save the situation. With a spray of bullets and artillery shells chasing him across the fire swept ground Ricketts repeated the miraculous 100 yard sprint for a second time carrying the extra load.

Ricketts safely returned to the spot he had left the Lewis gun. He loaded the gun and through accurate fire on the German gun crews drove the survivors into a nearby farmhouse. He dashed forward to the farmhouse firing the Lewis Gun from the hip in bursts, poked it in through the door and captured eight prisoners.

For this action he received the highest gallantry award that could be bestowed to any member serving in the forces of the British Empire­­ – The Victoria Cross. When King George V pinned the award to his chest in a special ceremony he became the youngest combatant in the army to receive the honour. He still is to this day.

51 Years ago on February 10, 1967, pharmacist Tommy Ricketts set off for his drugstore during a fierce winter storm. The city, enveloped in a churning blizzard and its homes blanketed in darkness from a power outage, Ricketts fought strong winds to get to his pharmacy on Water Street. That morning he called his wife to let her know that he had safely arrived. It would be the last time she would hear his voice. Within the hour, Tommy Ricketts VC, Newfoundland’s reluctant war hero, the highest decorated soldier in The Royal Newfoundland Regiment, had died.

The idea for the ceremony came from Warrant Officer Jim Prowse, a member of the famed Regiment and a Bugler. For Prowse it was personal:

I grew up hearing the story of Tommy Ricketts’ funeral from my father, who was a 21-year-old clarinet player in The Royal Newfoundland Regiment Band in 1967. Dad often recounted the story of the day of the funeral, especially that it was in mid-February and there were blizzard-like conditions. With the 50th anniversary of Tommy Ricketts’ passing, I am thinking about my own father and his role at the funeral back in 1967. I wanted to play The Last Post and Reveille at Ricketts’ graveside to mark this milestone. Ricketts had been a boy soldier, our regiment’s only Victoria Cross recipient, and apparently, a reluctant hero. He thought every soldier deserved to be recognized and that he did not deserve any special attention. Although today we will commemorate Tommy Ricketts, to my mind, we will be commemorating all those who answered the call to serve. 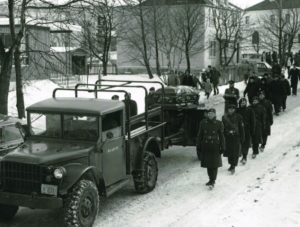 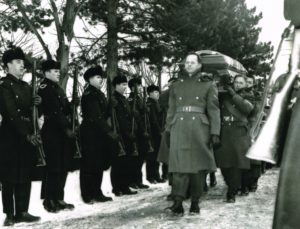