[vc_row][vc_column][vc_btn title=”Back” color=”danger” link=”url:http%3A%2F%2Frnfldrmuseum.ca%2Fearly-days-of-the-regiment-1795-1802%2F|||”][vc_column_text]Conditions in the Newfoundland station were harsh. The spoilage of winter food supplies stored at Signal Hill in 1797 and a fire at Fort William in 1798, which destroyed six barracks rooms and considerable stores of medicines, barrack bedding and ordnance stores, added to the privation endured by the rank and file. There were record numbers of desertions that year and open dissatisfaction among the troops. In May, 1799 Brigadier General William Skerret was appointed Commanding Officer of the troops in Newfoundland who were now answerable to the Commander in Chief in Nova Scotia. Skerret had only recently returned from leading troops tasked with ending the armed violence in Ireland.

In April, 1800 a plot was discovered among upwards of fifty members of the Royal Newfoundland Regiment who were sympathizers to the United Irish Movement, to desert their station and meet at the Powder Magazine behind Fort Townshend. Ten to twelve managed to leave Signal Hill before the alarm was sounded. Several others fled Fort Townshend but those at Fort William were prevented from leaving by a late night party hosted by Colonel Skinner.

Sixteen of the mutineers were captured and five of the organizers were ordered, by General Skerret, to be hanged on a makeshift gallows erected at the Powder Magazine which is currently Belvedere Street in St.John’s. The remainder were sent by prison ship to Halifax.

In July 1800, the rest of the Royal Newfoundland Regiment were transported to Halifax aboard the HMS Concord at the request of General Skerret who questioned the loyalty of his Regiment given that the troops were almost entirely of Irish descent. Only the Grenadier Company and the Light Infantry Companies of the Royal Newfoundland Regiment were kept in Newfoundland. In return the Duke of Kent sent the 66th Regiment of Foot to Newfoundland. The remainder of the mutineers were forced to march behind their own coffins en route to Fort George on Citadel Hill. Eight of the convicts were spared at the last moment and given life sentences and three more were summarily hanged in front of the entire garrison. 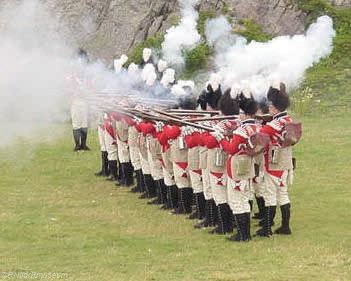 For the next two years the Royal Newfoundland Regiment provided garrison duties in Halifax. In March, 1802 with the signing of the Treaty of Amiens, the Regiment was disbanded. Some eight short months later England found itself at war with France yet again.[/vc_column_text][/vc_column][/vc_row]

One thought on “A Sad Chapter: Mutiny & Disbandment”